The majority of people train their own dogs but we do have contact details of Dog Trainers available to hire, you are also welcome to bring your own guest Dog Trainer if you wish to organise this yourself.

The Training Ground is also available for hire for other Dog Training activities such as Obedience Training, Agility Training, Dog Tracking and Dog Walking / Exercising.

Our training ground is ideal for walking in a safe secure area, hire it and run it as a dog walking business


WalkingRickneys Training Ground is available for hire for Dog Walking / Exercising. As the area is secure it is a perfect place to walk dogs safely, ideal for a dog walking business.

ObedienceRickneys Training Ground is available for hire for Dog Obedience Training. We would be happy to discuss with this with interested parties.


TrackingRickneys Training Ground is available for hire for Dog Tracking. We would be happy to discuss with interested parties wishing to set up Training Sessions and Training Equipment or run it as a business

AgilityRickneys Training Ground is available for hire for Dog Agility Training. We have a number of fences and dog jumps set up. Interested parties wishing to set up Training Sessions, Equipment or run an agility business should contact us.

We have many different types of ditches

Book a visit to Rickneys

We have many, many features, most of which are listed below, feel free to ask if what you'd like to do isn't listed.

We have seven types of jumps

There is a minimum hire charge based on morning, afternoon and evening sessions

Rabbit/Pigeon Shooting - £30.00 per person (multiple dogs can be taken)

Dog Agility Training – Please contact us below for details

Dog Obedience Training - £15.00 per person (multiple dogs can be taken)

Dog Tracking Training - £15.00 per person (multiple dogs can be taken)

ANYONE USING THE TRAINING FACILITIES DO SO ENTIRELY AT THEIR OWN RISK. NO LIABILITY WILL BE ACCEPTED BY THE LAND OWNER FOR ANY LOSS OR INJURY

Many different types of entry points

Abbie is an IABTC Qualified Dog Instructor and a member of the Guild of Dog Trainers. Riverlily Working Dogs run by Abbie offers Gundog Training for all standards of dogs and holds regular Group Training Days and Working Tests at Rickneys Training Ground.
For more information please contact Abbie via the Riverlily Working Dogs website and click on “Bengeo Training”.

Anita is an experienced gundog, working trials and obedience trainer who is available to give one to one or group lessons at the training ground. Monthly group gundog training lessons are held at the ground by Anita all year round.
For more information, please contact Anita directly for details.

Adem is an experienced gundog trainer who is available to give one to one or group lessons at the training ground for Beginners, Puppy, Novice through to Open standard dogs.
For more information please contact Adem directly for detail

Rickneys Dog Training Ground is also available for other guest trainers to use. We would be happy to discuss with interested parties wishing to hold training lessons or run it as a dog training business.

Feel free to contact us either by telephone, click on the email or use the form below.

Fill out my online form.

Directions to the ground

From the A10 take the Ware exit. Head towards Stevenage on the A602. Take the first exit at the roundabout towards Hertford on the B158. The entrance is after 0.5 mile on your left, directly after the ‘Crouchfield’ sign. From the A414 take the B158 at Hertford towards Bengeo. Over a small roundabout and entrance is after 0.5 mile on the right, 50 yards before the ‘Couchfields’ sign. There is no Postcode for the ground. Rickneys Farmhouse Postcode is SG12 0HD which is the nearest house to the ground, using this will get you to the area. Please refer to the location map below showing the Rickneys Farmhouse in relation to Rickneys Dog Training Ground. 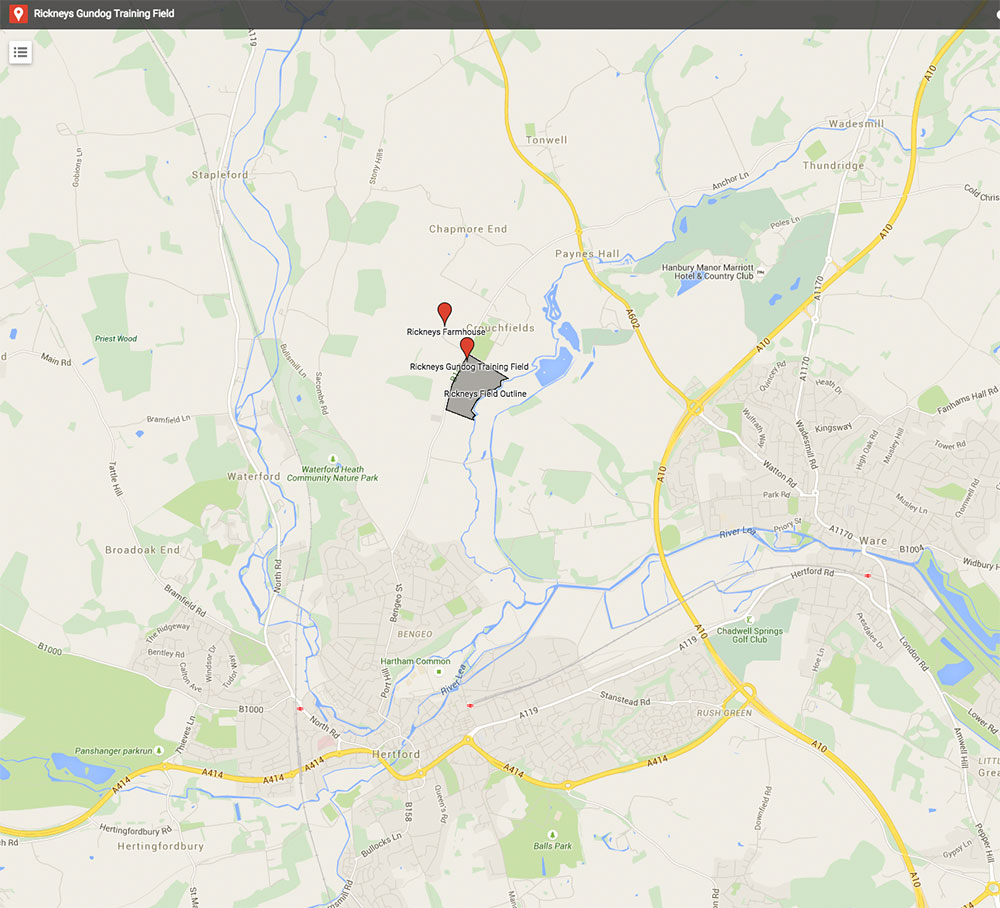 Places To Stay Near Rickneys Training Ground In Hertfordshire

We have listed bed and breakfast's and hotels close to Rickneys that people who have use our dog training ground have stayed in and have been happy with. There are many more hotels in the area which can be googled, however there is a shortage of bed and breakfast facilities near the ground. You will also need to check if dogs are allowed in the rooms should you require this option. 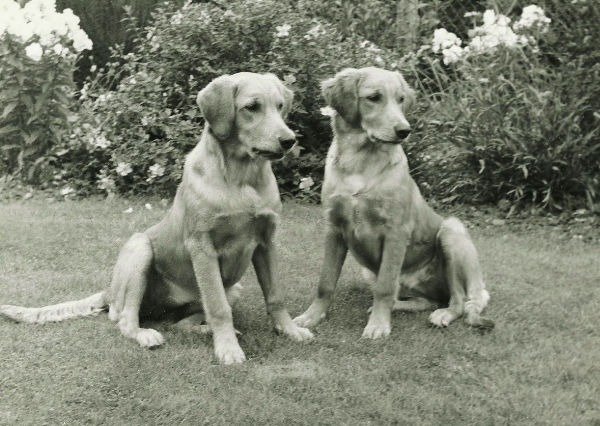 Sherry of Woodlands & her sister, Kim.

The Wadesmill Line was started in 1968 by Max and Dorothy Wright with their first working bitch, Sherry of Woodlands (foundation bitch), who won the Northern Golden Retriever Novice Field Trial in Spalding Lincolnshire in 1970.

Max and Dorothy were bitten by the field trial bug and bought in Wadesmill Caesar (the first dog to have the Wadesmill Affix) and went on to make him up into a Field Trial Champion in 1974. Sherry of Woodlands and FTch Wadesmill Caesar were mated in 1971 (foundation litter). From this litter Wadesmill Jane went on to compete in field trials gaining 8 second places in Open Stakes.

Max and Dorothy carried on the Wadesmill line up to 2010 when Andrew and Julie took over the Wadesmill Affix , breeding their first litter from their bitch Hoghedens Susa from Sweden and Wadesmill.

Marcus May Be of Wadesmill with Andrew Wright.

Marcus May Be of Wadesmill, IGL Retriever Champion in 2006. 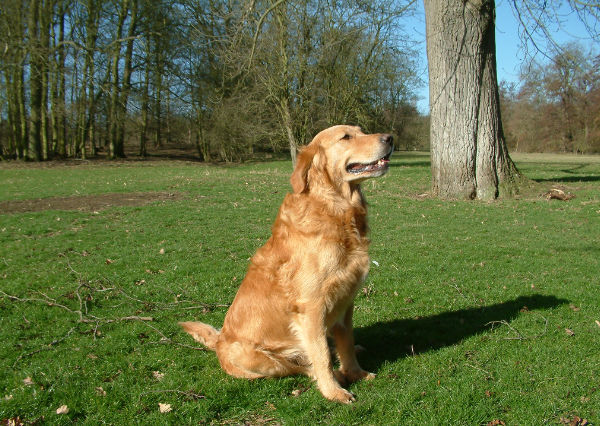 Andrew then went on to make up the fourth Wadesmill Field trial Champion with Archie Charlie of Wadesmill from the litter by Wadesmill Sherry (litter sister of Wadesmill Ben and Glen) who won the 2006 Chiltern Gundog Open Stake and 2008 Golden Retriever Club 2 day Open Stake. 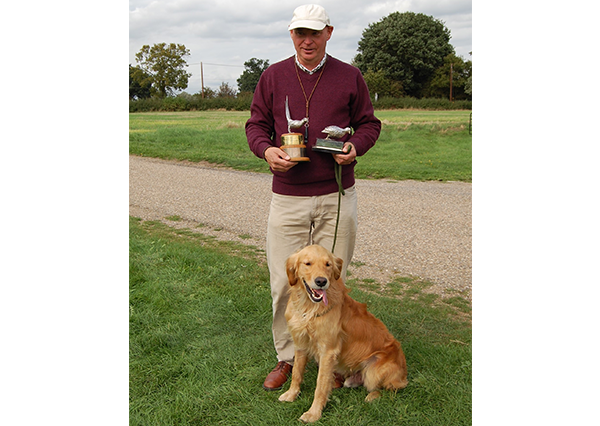 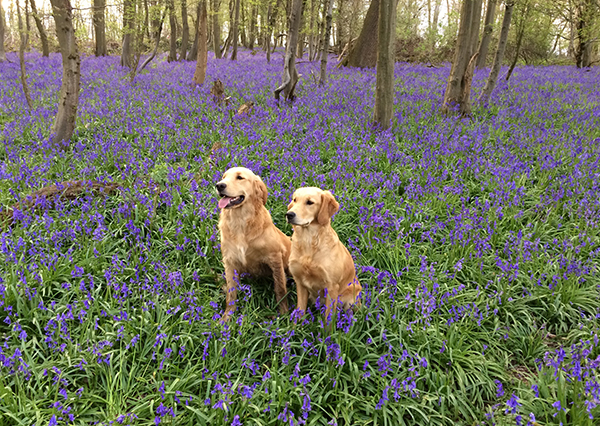 The Wadesmill Line now goes back nine generations and is still going strong.

The Overthwarths line was started by Andrew and Julie Wright from their first working Labrador bitch, Birdbrook Opel. 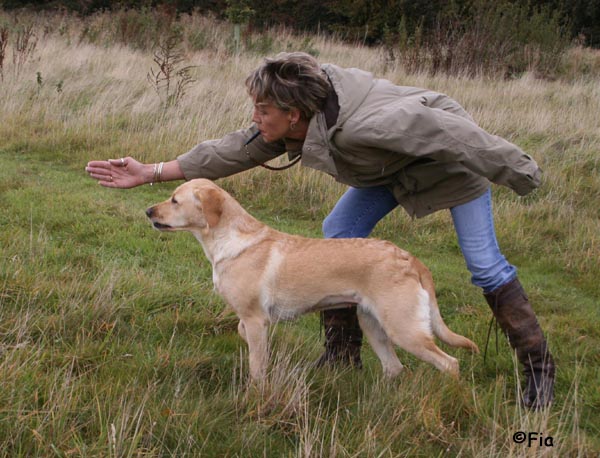 The lines prefix name of Overthwarts is from Julie's Grandparents farm near Alnwick in Northumberland where Julie spent much of her childhood at weekends and school holidays. 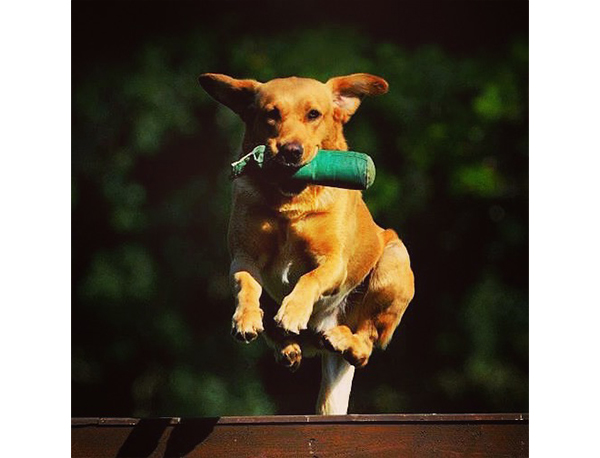 Overthwarts Tweed by Birdbrook Opel has also had numerous working test awards and has won a novice field trial, so is qualified to run in open stake field trials. 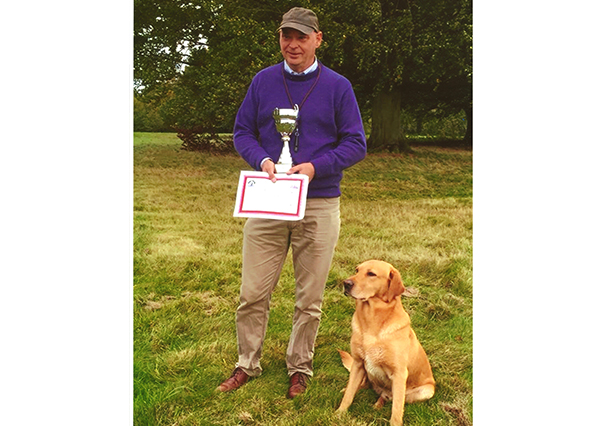 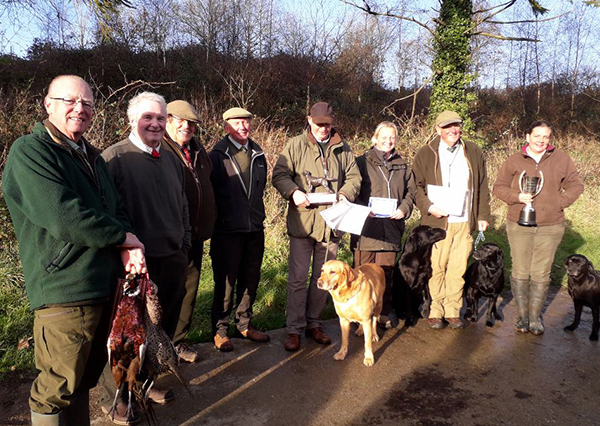 At Rickneys, we often have gundog and labrador puppies for sale, to find out more, please email julie@rickneys.com. We'll put pictures up in this gallery to show you the adorable puppies. 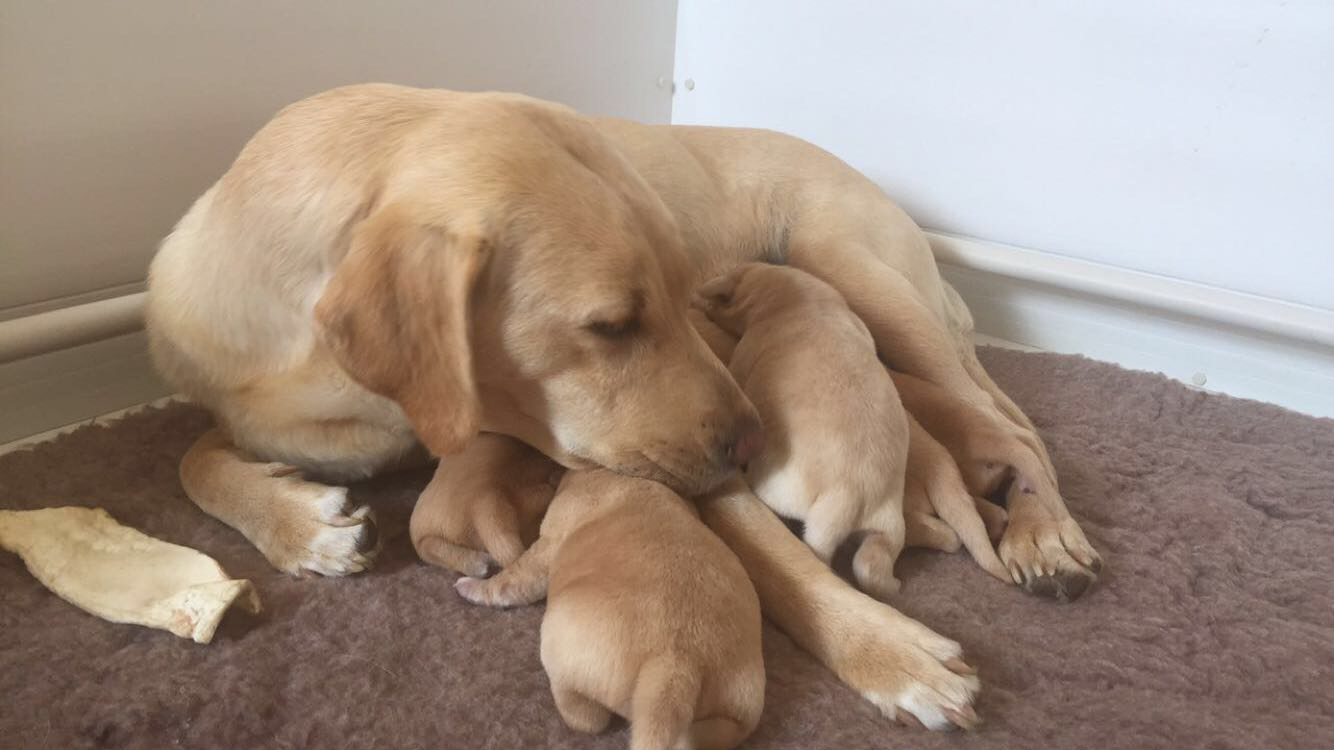 Overthwarts Swarland with her puppies born on the 13 July 2016 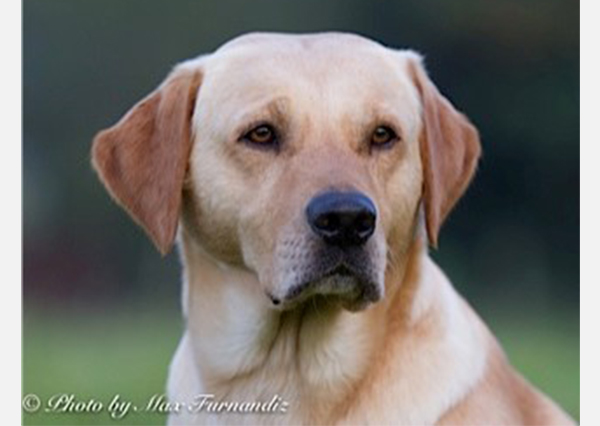 Meet the father of our latest puppies, Ferbury Lancelot of Smithstead 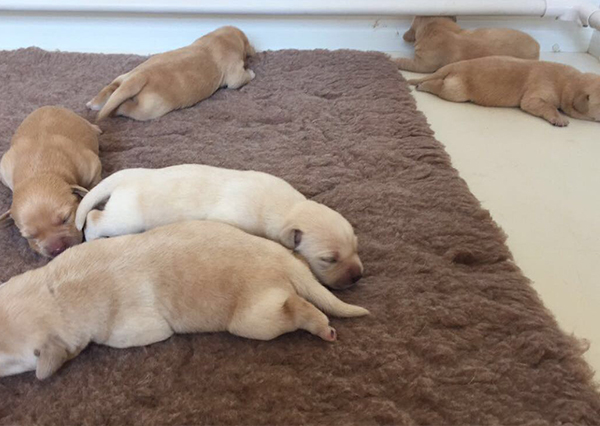 Another picture of our one week old puppies 20 July 2016 - more pictures coming soon! 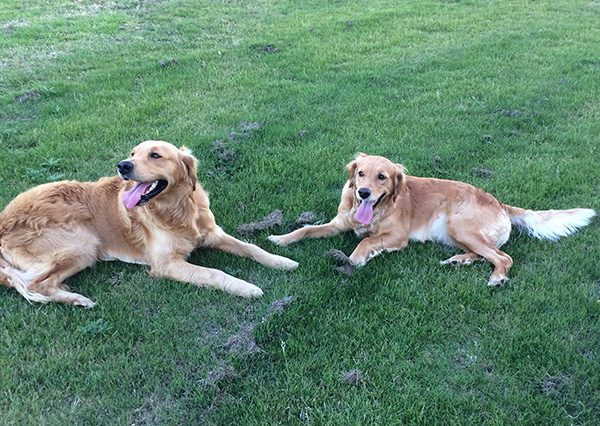 These are the parents of our puppies born in 2015, Wadesmill Daffodil and Wadesmill Sacome 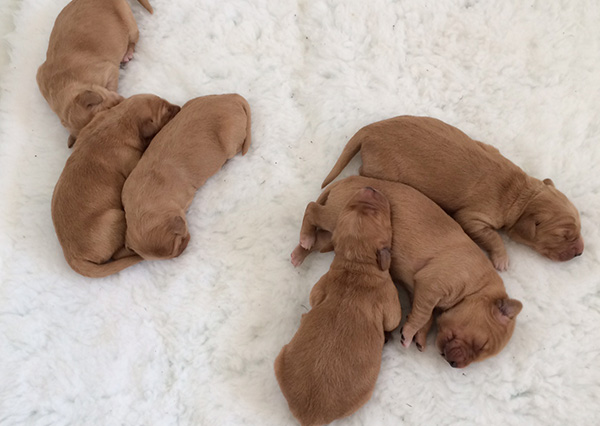 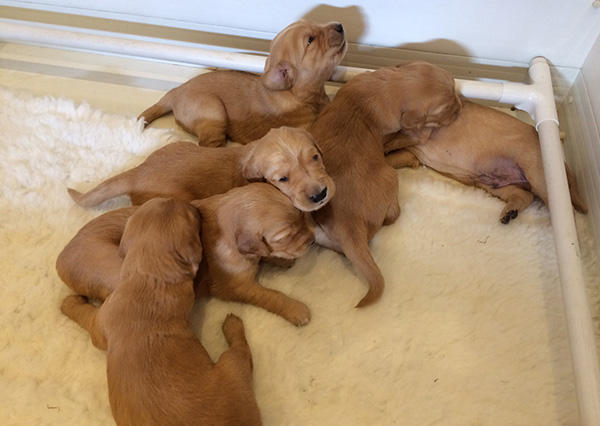